IMPORTANT NOTICE: It is the responsibility of all users to ensure that any application that they complete or lodge has been filled out correctly. You should always proof read / check an application before sending it to a client or lodging it to ensure all of the necessary details have been completed correctly. Also note that Migration Manager's ability to populate fields is only as good as the quality of the data recorded in the system.

Depending on the type of review application being sought, you will either need to open either a Migrant or a Business Sponsor Matter*. You have the following options:

In this case, as the review application is relating to a decision affecting a Nomination (whether it be a refusal or a cancellation), you must open the affected migrant Matter as that is where the review application will be lodged from (even if the sponsor is the person/entity with standing to seek the review).* Note that you will also need to open up the linked Sponsor's Matter as details of the decision will also need to be recorded there as per step 2 below.

*Note that the type of matter opened is not dependent on who is seeking to lodge the review application - the person/entity seeking review is determined at a later step.

2. Check/Record details of the decision are recorded on the Sponsor matter

In order to lodge a review application, details of the decision must be recorded on the relevant matter and, where necessary, any linked matter (for example nominations). Open the linked Sponsorship matter and ensure details of the refused or cancelled nomination are recorded under the Lodgement tab of the Nominations tab in the Sponsor matter. 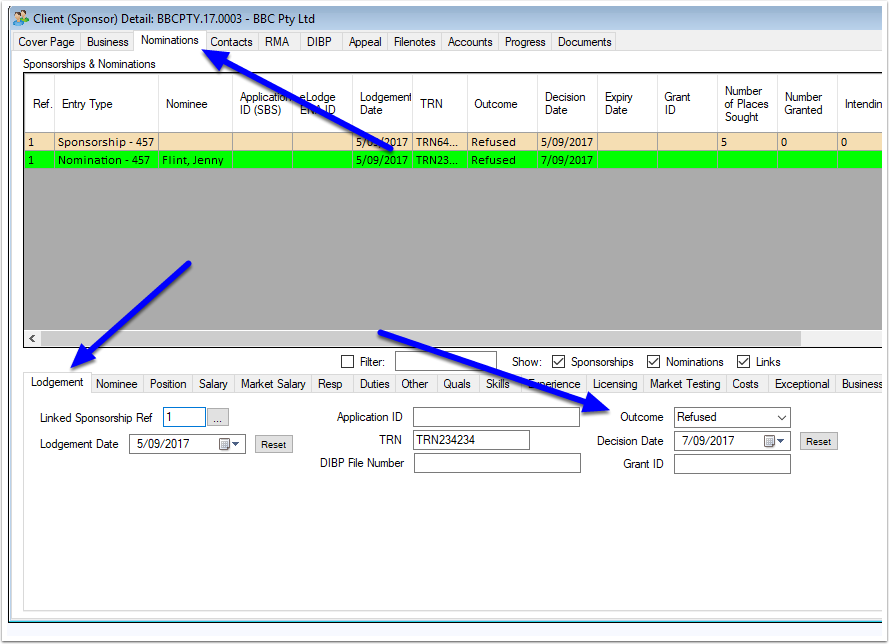 As per the notes at point 1, the review application for the nomination decision will be run from the linked Migrant Matter. As such the Migrant Matter must be the Active matter.

Once you have opened the relevant Matter, click the eLodge button in the main toolbar

The eLodge window will now appear. Note that if you have set your matter category as Appeal and the Matter Type, this will automatically populate the fields (and you can skip the next two steps). 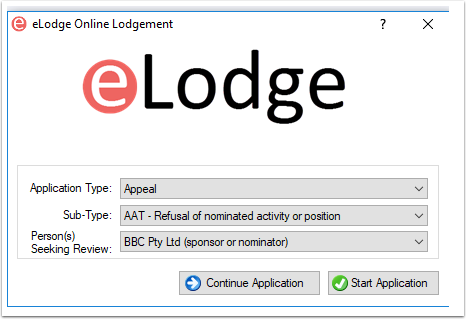 5. Select Appeal as the Application Type 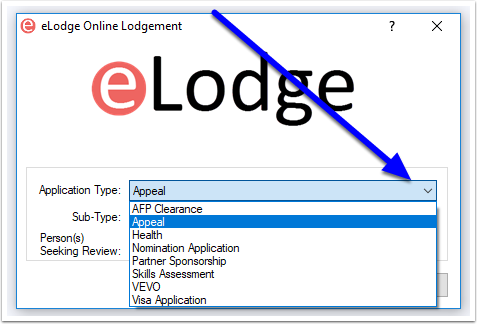 6. Select the sub-type of application you want to prepare

From the Sub-Type dropdown, select the type of review application you wish to prepare using the eLodge system. 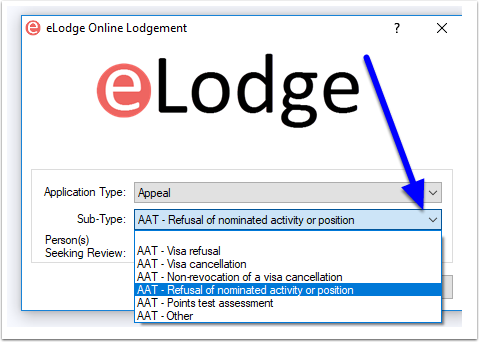 Important - it is your responsibility to correctly select the individual/entity who has the legal right to lodge the review application. Migration Manager can not provide you with advice or assistance on this issue. 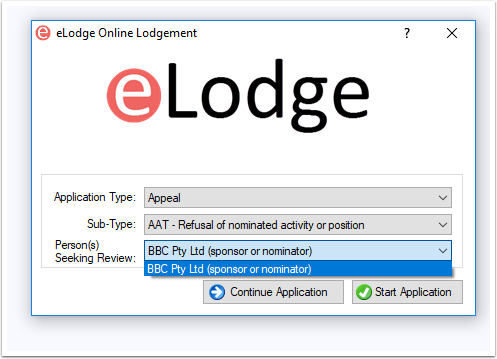 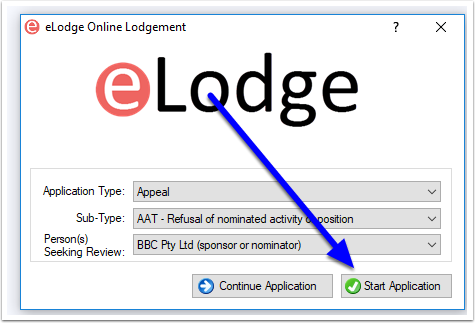 9. Acknowledge and Accept your responsibilities and the End User Agreement

It is the responsibility of all users to ensure that any application that they complete or lodge has been filled out correctly. You should always proof read / check an application before sending it to a client or lodging with the AAT to ensure all of the necessary details have been completed correctly. Also note that Migration Manager's ability to populate fields is only as good as the quality of the data recorded in the system. herefore you should check everything carefully.   A copy of the current End User Agreement can be obtained by clicking here: End User Agreement. 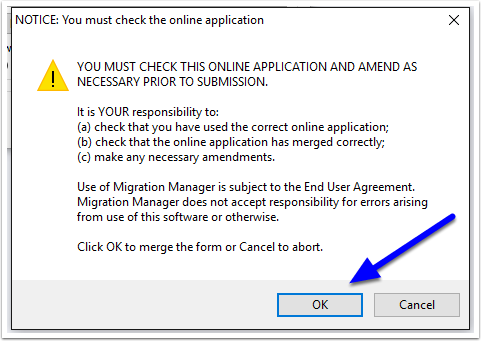 A Google Chrome browser should now open on your computer. The Migration Manager eLodge Filler buttons will also appear in the top left hand corner of the screen as well as the AAT login panel. 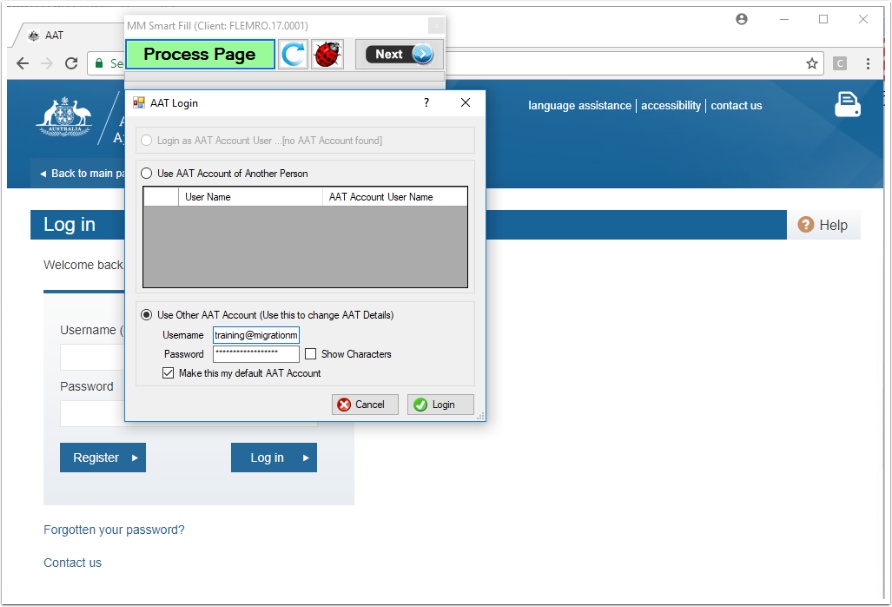 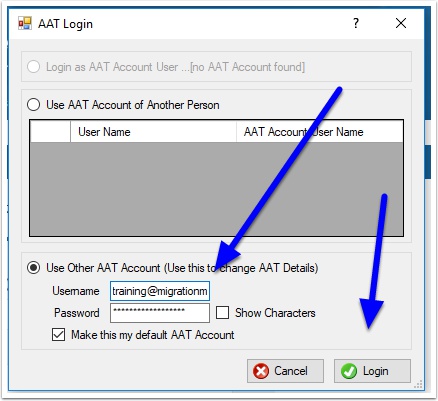 12. Commence filling out the Application

The eLodge System will now proceed to fill out the review application. Use the eLodge toolbar to process and complete each page. Once you click Process Page, the eLodge toolbar will enter data into the various fields. The process bar will go fully green once it is complete and then go clear, at which point you can either manually type in any other fields.

Note: the eLodge system can only fill a field if the data is held within the program. If a field does not fill please check that the information has actually be recorded in the program. 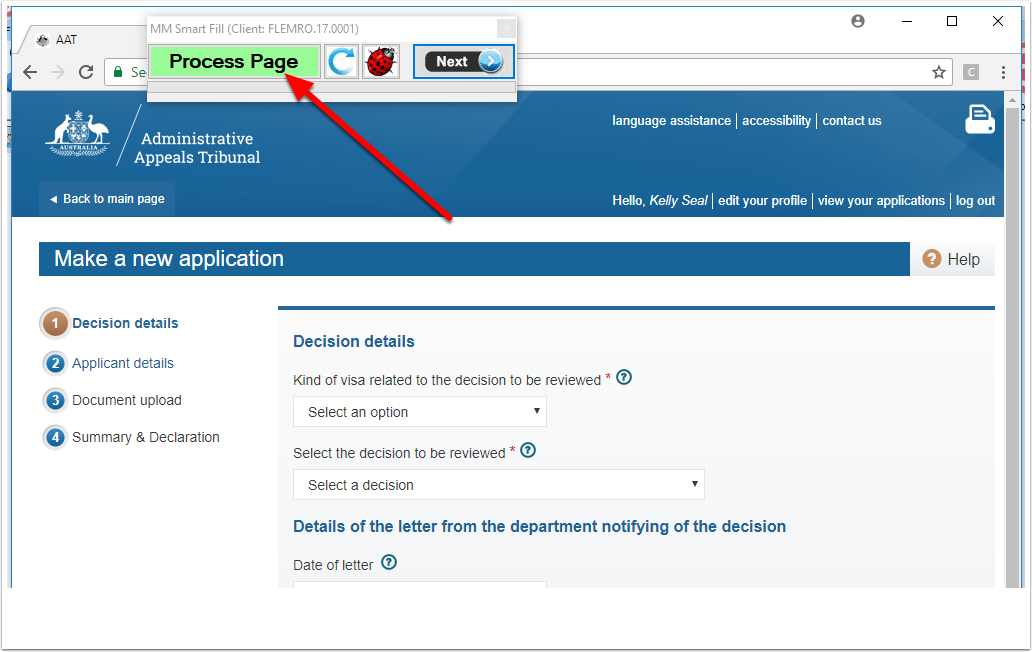 After the system has finished completeing a page, review it to make sure that all of the content has been completed. If there is missing information you can manually type the required information. Once complete, you can move to the next page by clicking the 'Next' button on the eLodge toolbar. The eLodge system will then proceed to the next page of the application.

Continue to fill in the remainder of the application remembering to always click the 'Process Page' button on each page, followed by the 'Next' button.

If you answer a question that has multiple entries to be added, the Smart Filler should tell you how many have been inserted. To ensure that you do not miss any entries make sure you always click 'Process Page' whenever you come to or a returned to a multi entry page / section.

15. Review and Print the Application

When you reach the summary page of the application, it is strongly recommended that you review what has been completed and make any necessary amendments. Again, it is your responsibility of ensure that any application that you complete or lodge has been filled out correctly. You should always proof read / check an application before sending it to a client or lodging with the aAT to ensure all of the necessary details have been completed correctly. We also recommend that you print a copy of the application by clicking the 'Print' button on the webpage.

When you have finished with eLodge, you must close both the webpage and the Smart Filler tool. Do Not start another eLodge application without first closing these windows. Any new eLodge must be started from within Migration Manager in order for eLodge toolbar to work.